New rules expected to be published here next month will permit experimental cultivation of genetically modified corn, ending a moratorium on such plantings that was ......

Palena province, home to some of Chile’s most spectacular terrain, has literally been under a cloud since the awakening this month of long-dormant Chaiten volcano. Some ......

Can agricultural standards be developed voluntarily that would make South America’s boom in soy cultivation environmentally sustainable? A multi-stakeholder group including representatives of agribusiness, environmental organizations, ......

Latin American environmental and cultural riches don’t get much richer than those of the Mayan Biosphere Reserve (MBR), a five-million-acre (two-million-ha) protected area in northern ......

Jan Maarten Dros is a consultant with AIDEnvironment, a Dutch nonprofit that advises businesses, public agencies and organizations on sustainable-development strategies. A specialist in development ...... 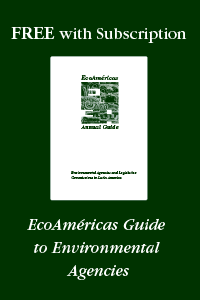 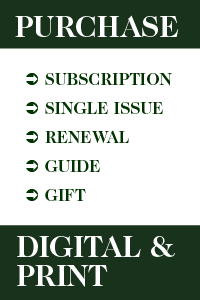 Latin American environmental and cultural riches don’t get much richer than those of the Mayan Biosphere Reserve (MBR), a five-million-acre (two-million-ha) protected area in northern Guatemala’s Petén region.

The reserve forms part of the Maya forest, which extends into Belize and Mexico and is the largest remaining woodland in the Mesoamerican region. It hosts a vast array of wildlife, including 111 species of mammal and 442 bird, 107 reptile and 22 amphibian species. The biosphere’s plant species number some 3,000 and include a native pine (Pinus caribaea) that dates from the Ice Age, as well as the red mangrove (RhIzophora mangle), which provides crucial habitat for coastal marine life and serves as a buffer against storms. In Sierra del Lacandón National Park, one of five national parks in the biosphere, water-filled sinkholes, or cenotes, extend some 300 feet (100 meters) underground.

Cultural wealth also abounds in the reserve. A dwindling population of Mayan Itzá people, direct descendants of the Mayans who inhabited the region until the arrival of the Spanish in the 15th century, lives in a small area north of Lake Petén Itzá. Scattered through the protected area, meanwhile, lie some 200 archaeological sites. These include Tikal, which the United Nations Educational, Scientific and Cultural Organization (Unesco) declared a World Heritage Site in 1979.

Such attributes rank the biosphere as one of Central America’s foremost tourist draws. They also help explain why many experts here are alarmed by a confluence of trends in the Petén region—among them, drug-trafficking, oil-palm cultivation and road construction. The overarching worry is that such trends, albeit in different ways, spur migration into the biosphere and the deforestation this inevitably brings.

“We’re very concerned because we’re facing a wave of migration from different parts of the country, east and west, to protected areas and archaeological sites,” says Vice Minister for the Environment Alejandra Sobenes.

In March, Sobenes reported 27 instances of peasants settling illegally in Petén’s protected areas since the first of the year, most in the biosphere.

“We’re especially worried about the fact that these invasions are occurring during the dry season, which increases the risk of forest fires,” she said. “We fear these peasants will start burning the forest to clear the land and grow crops.”

The Maya Biosphere Reserve comprises zones with differing degrees of environmental protection. Nucleus zones, which make up 39% of the reserve, are subject to the strictest controls and include five national parks and four biotopes. The multiple-use portion, accounting for 38% of the reserve, can be used for such low-impact activities as sustainable logging. And in the buffer zone, a 15-km (nine-mile) wide outer ring that makes up 23% of the biosphere, logging, agriculture and farming is allowed, and settlers can purchase land. It is in the buffer zone that nearly two-thirds of the reserve’s deforestation over the past 20 years has occurred.

Environmental damage has been most severe in the areas with permanent human settlements. Almost two-thirds of the reserve’s population of more than 100,000 people comprises immigrants from Petén and other departments in Guatemala, the rest being indigenous.

Migration of settlers into the region that the reserve now occupies began in the 1960s, when military governments of the day promoted colonization of Petén to ease land shortages elsewhere in the country.

Today, the government no longer encourages such migration. But in practice, colonization has continued. Authorities were astounded to discover that a target of the most recent migrations was the archaeological site El Mirador. The site, one of the most remote in the reserve, lies deep in the jungle near the Mexican border and is not accessible by vehicle, so the peasants must have trekked for days through dense vegetation in sweltering heat.

Peasant migration has occurred partly with help from drug traffickers known as narcoganaderos, or narco-ranchers, who have paid peasants to clear forest and use the land for crops or livestock, says Yuri Melini, director of the Center for Legal, Environmental and Social Action (Calas), a Guatemala City-based nonprofit. In exchange, the traffickers operate airstrips on the cleared land to fly in Colombian cocaine, which is smuggled to the United States by way of Mexico, Melini says.

For centuries, the Petén’s proximity to the Mexican border and its vast expanse of dense, isolated jungle have provided ideal cover for smugglers. The trafficking these days involves timber, archaeological artifacts, U.S.-bound migrants and lucrative drug shipments such as a 660-pound (300-kg) cocaine cargo that police intercepted April 12. That shipment, valued at about US$3.5 million, was foiled in the village of La Casaca, in the municipality of La Libertad, about 30 miles (50 kms) south of the reserve.

Drug smuggling, however, is by no means the only cause of migration into the reserve. Also cited, for example, is the emerging African oil-palm industry in the southern portion of the Petén region. In the late 1990s, local palm-oil company Aceite Olmeca set up a huge plantation between the municipalities of Sayaxché and San Luis in southern Petén. Originally about 10,550 acres (4,270 has), the plantation has expanded steadily and now covers an area nearly 10 times as large. In the process, peasants have sold their plots—under pressure from the company, many of them say—and moved north toward the biosphere to find new land.

“Some of these people are dispossessed peasants and others are involved in drug trafficking,” says Vinicio Montero, Conap director for the Petén region. “It is important to remember that African palm monocultures have displaced entire communities. All the land in Sayaxché that is now used to grow African palm, almost 106,255 acres (43,000 has), used to belong to peasants with small landholdings. People sell their land, they often squander the money and then they invade protected areas.”

Byron Castellanos, director of the Guatemalan environmental group Balam, says the problem has been exacerbated by local politicians who during campaigning for general elections here last November promised peasant communities titles to land they occupy in the biosphere. Castellanos agrees with Montero on the impact of African palm monocultures, estimating that around 60% of the peasants who have invaded protected areas have come from southern Petén. The remaining 40% have arrived mainly from the neighboring departments of Alta Verapaz and Izabal, he says.

In March, Conap held a meeting with Interior Minister Vinicio Gómez and Defense Vice Minister Carlos Alvarado Fernández to find a solution to the growing loss of control in Petén. One of the government’s proposals has been to impose a state of emergency in the region and create a special army unit to safeguard the biosphere reserve.

Castellanos warns that dispatching troops “is a palliative measure,” saying that if the government does not take serious action to alleviate rural poverty, “there will be more [land] invasions in a year’s time.”

The pace of such migration could grow exponentially in future years, green groups say, if the Guatemalan government fully implements road projects contained in Plan Puebla Panamá (PPP). The plan, a US$10 billion infrastructure, utility and commercial-integration initiative, targets the 62 million people living in the nine southern states of Mexico and in Guatemala, Belize, Honduras, El Salvador, Nicaragua, Costa Rica, Colombia and Panama.

The PPP comprises 28 distinct so-called mega-projects that leaders of the nine countries claim will attract private investment, boost trade and bring prosperity to a chronically impoverished region. It is the Mesoamerican version of the project for Integration of South American Regional Infrastructure (see “Road to progress, or to eco-degradation?”—EcoAméricas, March ’08) and is intended to complement free-trade initiatives in the region.

The International Network of Mesoamerican Roads, a key element of the PPP, contemplates the improvement of over 6,200 miles (10,000 kms) of roads, and the construction of an additional 620 miles (1,000 kms) of new roads in southern Mexico and Central America. In Guatemala, work is underway on two roads—El Ceibo-El Naranjo and Flores-Melchor de Mencos that lead to the edge of the reserve and are slated to link up with two routes planned for the biosphere.

The goal, planners say, is not only to speed truck shipments of goods throughout Central America and southern Mexico, but also to boost tourist access to the reserve.

To gauge the effects such projects would have on the reserve, the Guatemalan Conservation group Trópico Verde, the Guatemalan branch of the U.S.-based Wildlife Conservation Society (WCS) and other organizations recently studied the impacts that roads in the reserve have had on surrounding forest. The report, funded by the Conservation Strategy Fund and the Critical Ecosystem Partnership Fund is titled “Roads in the Mayan Forest: an environmental and economic analysis.”

The 128-page report concludes there has been a strong link between road building and deforestation in the reserve, and that further projects will accelerate the already alarming pace of illegal land clearing.

In 2005, two roads traversed the reserve, covering 96 miles (154 kms) in all. Dirt tracks and dry-season paths accounted for an additional 452 miles (728 kms) and 841 miles (1,354 kms), respectively. Though these various routes saw limited use, their impact as conduits for deforestation was large, the study says. For instance, a road built in the period 1978 to 1984 to allow the transport of oil extracted in the Petén forest led to constant colonization and deforestation, even after the reserve’s creation in 1990.

The study estimates projects envisaged by Plan Puebla Panama would result in the deforestation of at least 92,740 acres (37,530 has) of reserve land by 2025. And with deforestation comes the worry of increased fire risk from slash-and-burn agriculture.

Delfino Mendoza, planning director at Guatemala’s road works agency, says biosphere road expansion is unlikely in the immediate term. Environmental opposition and sentiment in international-finance circles that the Petén is risky have caused those projects to descend on the government’s priority list, he says.

However, Carlos Albacete, a member of the Guatemalan environmental group Trópico Verde and a co-author of the study, claims government officials play down the prospect of roadwork in the reserve at home but deliver a different message abroad.

Albacete says President Álvaro Colom recently told the governor of Mexico’s Quintana Roo state of his “intention to press ahead with construction of the road from Tikal to the Mexican border.” And in a recent meeting with the Inter-American Development Bank, he says, Guatemalan officials discussed the need to move forward with the Tikal-Uaxactún road.

Says Albacete: “There are negotiations taking place behind closed doors, away from media scrutiny.”

New rules expected to be published here next month will permit experimental cultivation of genetically modified corn, ending a moratorium on such plantings that was ......

Palena province, home to some of Chile’s most spectacular terrain, has literally been under a cloud since the awakening this month of long-dormant Chaiten volcano. Some ......

Can agricultural standards be developed voluntarily that would make South America’s boom in soy cultivation environmentally sustainable? A multi-stakeholder group including representatives of agribusiness, environmental organizations, ......

Latin American environmental and cultural riches don’t get much richer than those of the Mayan Biosphere Reserve (MBR), a five-million-acre (two-million-ha) protected area in northern ......

Jan Maarten Dros is a consultant with AIDEnvironment, a Dutch nonprofit that advises businesses, public agencies and organizations on sustainable-development strategies. A specialist in development ......